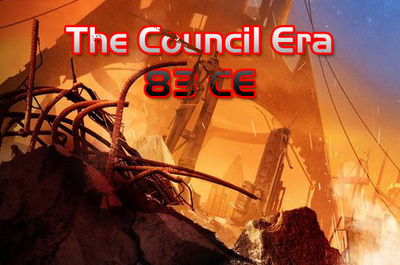 This is the start of something great.

Life on the Citadel is hard, family's children assisting in any way to defeat the terrible Rachni soldiers. The asari and salarians are trying their hardest to fight the dreaded Rachni, their ace in the hole being the large monstrosities known as Krogan. The only thing that could make their problem worse is another war. The loosely tied species known as the Manaba are causing an uproar and the Council worries that they are spread too thin to deal with both issues.

The Citadel Arc has been closed.

The Rachni ruled world known to have the most Rachni queens on a single world is a stronghold for the Rachni. The Krogan have been specifically sent there to deal with the large infestation, though smaller than desired armies have caused the Citadel to recruit more of another brute force army, the Dezba, have been sent to ally with the Krogan and to help destroy the threat that could turn the tide of the war.

The Ragnora Arc has been closed.

Omicron, the planet closest to the Rachni's Mass Relay is under constant attack. The Rachni come and the Rachni retreat. Most often this is where the Council sends species to weak too withstand the constant strain of Rachni on Ragnora. If the Council is able to hold the enemy at bay, they may just win the war early.

The Omicron Arc has been put on hiatus. This section should be ignored by readers for now.

Be sure to use the RP Info template, {{RP Info|Username}}

This Collaboration-Story is open to any registered user.

Any questions, concerns or answers related to the fanfic will go here

In 83 CE there were only two councilors, and I think it'd be smart to have two people write as them. I volunteer to do one, but someone should play as the other. This will not count toward your other characters as these may be really important to the story. Whoever volunteers first gets to be the other councilor, and to those who also wanted it, don't worry. There will be other important characters that need filling. -BluethunderContact 00:46, July 24, 2010 (UTC)

I will take one but would there not be three as I believe you added the Manaba as joining the council in the timeline. Correct me if I read wrongly. Also the Dezba page is finished So we only have the Rhooks left. Foxtrot12 01:13, July 24, 2010 (UTC)

Alright then I got my characters. A Salarian STG captain, a Dezba Chieftan leading his clan against the Rachni, and a Manaba Holy Warrior (Highest rank in warrior caste). This will be fun!Foxtrot12 02:16, July 24, 2010 (UTC)

Sorry I was away forever! Today was a relative's birthday. Anyways, if not already chosen, can I play the Salarian? I love them.

Don't worry, I probably won't be on much on Wednesday since it's my birthday (I just realized that :P) The Salarian councilman has been chosen but you can always play as another Salarian character, like a soldier or scientist. -BluethunderContact 03:03, July 24, 2010 (UTC)
Wait who is the Salarian and who is the Asari? And we going to have a Manaba councilor as they written in as having a councilorFoxtrot12 03:06, July 24, 2010 (UTC)

The Krogan had a Councilor during the Rachni Wars up until the beginning of the Krogan Rebellions. —InfernalWarrior [ talk ]

Shortly after their uplifting, the Krogan were granted a seat on the Citadel Council to fill the vacant peacekeeping and military niche due to the devastation that had been inflicted on the Salarian and Asari armies. I would assume that they would possess a seat during the Rachni Wars due to the fact that the Krogan were the main arm of the Citadel military at the time, and as the Citadel Council made all of the major military decisions, it would be logical that the Krogan would have a seat so that they could participate in the development and prosecution of military strategy against the Rachni. —InfernalWarrior [ talk ]

I think we should wait as it not logical they have a seat so early. However we do not know how long this will last RP time. By the end it could be 90 CE for all we know. If major time progresses then we should give the Krogan a seat. Until then how about an ambassador warlord special character?Foxtrot12 19:35, July 25, 2010 (UTC)

You start building their character like the other ones you've made, though this character is important as important events can be caused by him (though consulting with me and other important characters is needed). -BluethunderContact 19:59, July 25, 2010 (UTC)

Could he be in the Urdnot clan?

Here's a list of the usable species, if you have any objections, be sure to voice them.

NOTE:I've added the number of playable species, if there are any other objections, please tell me. -BluethunderContact 01:41, July 24, 2010 (UTC)

Umm... Excuse me for asking, but what about the Krogans?

Were the Rachni ever considered? As a Rachni queen could make a good councilmen like character. Also now that we are so close to starting how exactly are we gonna do this? Foxtrot12 20:26, July 24, 2010 (UTC)

Rachni were once considered, but I think just making the Rachni queen a special character would be better. The style of the RP will have three main topics/locations (Citadel, Ragnora and Omicron) and inside each of those will be sub-topic and in the sub topic is where the RP will take place. It may sound a bit confusing, but I do plan to have an example up soon. -BluethunderContact 20:33, July 24, 2010 (UTC)

How about different kinds of Rachni in the Rachni war never seen anywhere else, that were driven extinct, completely, and never came back for Shepard's travels?

I photoshoped a green rachni that could be like infected with a disease or have strong poison levels. -BluethunderContact 00:29, July 25, 2010 (UTC)

Nice! That's a good photo. So, what about like, Rachni Flier, like a flying Rachni. What do you think of that idea? And what Photoshop do you use? I only use GIMP.

I use a very old version of photoshop. Its pretty decent though. A flying rachni would be great, but I know I couldn't make it in photoshop. -BluethunderContact 00:42, July 25, 2010 (UTC)

I got an idea for the Rachni, if you've read up on your Rachni history, it appears that Sovereign may have indoctrinated the Rachni. Perhaps we have a group of Rachni that have "freed" themselves from its control and are fighting to free the rest of their species. To be honest, I think this could only work towards the end of the Rachni Wars when Sovereign would probably given up on the Rachni.--Josh BenderTalk 00:45, July 25, 2010 (UTC)

@BT: I think we could just go with it without a picture. I mean, we don't, need, need one. @Nightmare: Since the ME article on them mentioned that, I think we could make that happen in the ending posts, that we find them, and they give an ultimate sacrifice to free their brethren? Check out this page for some songs we could use for when we find them... But that would be well into the RP.

Can I join in? Although it seems like all of the ambassador and Councilor roles have been filled, and I don't want to be doing battle on Ragnora or Omicron...oh well. Lovelyb0nes 00:54, August 4, 2010 (UTC)

You can join. It's stated that just sign your name, make your characters, and post away! :D

You can always play as an ambassador's adviser. Also, Volus, Dezba, Rhook and Elcor do not have Ambassadors. -BluethunderContact 01:00, August 4, 2010 (UTC)

Hi, I read from lovelybones that there seems to be a disagreement for the dezba's fate. I find that the only way to make sure this problem is solved is a vote/discussion. All wrirers should at least tell if they want dezba wiped out sooner or later. If you can, place provide a good reason for your opinion. -BluethunderContact 17:23, August 12, 2010 (UTC)

There are essentially two different ideas on how the Dezba's fate plays out; the Lovelyb0nes Proposal, and the Foxtrot Proposal. Those of you with your own idea can type about it below.

The Lovelyb0nes Prop. - The Dezba murdered over 1000 citizens of the Citadel to avenge the death of High Chieftain Takavor Derishama. As retaliation for their actions, the Council orders a mass genocide of the Dezban people. I'm envisioning the soldiers serving alongside Dezba during the Rachni War suddenly getting an Order 66-esque command to execute their Dezban comrades. For those of you who support the Lovelyb0nes Prop., give your signature here.

Lovely I agree with your proprosition and it does make a good ending. I want to see it happen. However I add on to it with suddenly out of the blue a few hundred thousand dezba and Takavor return for the krogans. As a revenge and final savage act. The krogans ace in the hole. And gamechanger for the krogan. With the dezba on full hate mode and with the fight to the death goal of avenging the fallen dezba of the Rachni Wars. With the dezba going out with a final savage act against the universe. And being blown or shot the fuck up and dying forever. Foxtrot12 21:09, August 12, 2010 (UTC)

Split decision compromise. AFTER the Dezba are recruited by the Krogans, the order is initiated, dwindling the chances of the Krogan surviving the Krogan Rebellions (which they almost didn't.) I like compromise. It avoids arguing.

Yes. That is my proposal. We already have a LOT of Krogans waiting to come, remember.

Community content is available under CC-BY-SA unless otherwise noted.
Advertisement